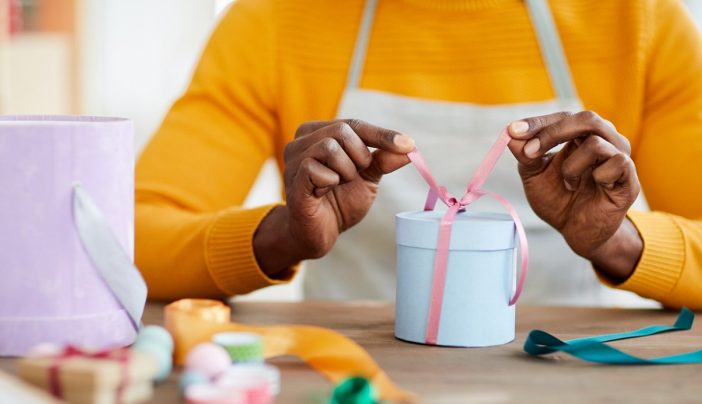 A bag of simple peppermint candies can provide welcome relief from the nausea that sometimes accompanies chemotherapy. And a tube of high-quality moisturizer can do wonders for relieving the skin irritation sometimes caused by radiation therapy.

But aside from these and other basics, like warm socks and insulated water bottles, what are the best gifts to give to patients facing cancer treatment?

We asked 16 cancer survivors what was most meaningful to them. Here are some of their favorite gifts.

“Having a visual reminder that people were waiting for me to cross the finish line was quite motivating,” says Dr. Connie Porter, a breast cancer survivor. “One day I was lying down feeling unusually bad. I scanned the room and saw a plaque some students had given me on the fireplace. It read, ‘Never forget that you are more brave than you think, stronger than you look and love more than you think.” Something about it just spoke to me about bravery, and I was able to get up and do what I had to do.

“A college roommate sent me a bronze key on a gold chain,” says Nicole Body, a sarcoma survivor. “The key was inscribed with the word ‘COURAGE’ and I wore it every day. The idea was to keep it until I felt ready to pass it on to someone else. So I I drew strength from it until I was declared cured of cancer, then I gave it to another friend who had just lost her husband.

“The first time I had treatment for leukemia, a friend gave me ‘The Book of Joy’ by the Dalai Lama and Desmond Tutu,” says Dr Julie Hildebrand, a four-time cancer survivor. “Reading the struggles and paths to wisdom of two great spiritual leaders helped me live joyfully through my own adversity. To this day, I continue to reflect on my favorite passages. This book has reshaped my approach to life. daily.

“My favorite gift was a book called ‘Prayer in the Night’ by Tish Harrison Warren,” says Sarah Pattison, an inflammatory breast cancer survivor. “It was given to me by a friend in Bible study and helped me reconcile some questions I had about faith and suffering.”

“I was lucky to have people who could come and stay with me while I received treatment in Houston, including my adult daughter,” said Linda Thomas, a granular cell carcinoma survivor. “We made a schedule and rotated people in my little temporary apartment for the whole summer. Being so far from home, having company was really important, because otherwise I would have been alone, undergoing cancer treatment, in an unfamiliar city.

“When I told my son I had inflammatory breast cancer, he immediately quit his job, let his apartment go and left his fiancée at home,” said survivor Dorcas Powell. “He knew I was terrified of driving in the big city, but determined to go to MD Anderson. Thanks to him, I never missed an appointment. Even during a major flood in Houston, he found a way to get me through chemo and get me home safely.

“I have a knack for spending holidays in MD Andersonsays Beth Norris, a multiple myeloma survivor. “But my husband and kids tried to make it look as normal as possible. They even helped me win the Pole Decorating Contest IV on Christmas Day in 2015. No words can describe how that made me feel. They brought me so much love and laughter. It gave a sense of normalcy to one of the most difficult times of my life.

The convenience of prepared meals

“My in-laws really wanted to show their support, but they live out of state,” says Angela Hernandez, an ovarian cancer survivor. “So they signed us up with a local service to have healthy meals delivered twice a week. Neither my husband nor I had the energy to cook. So it really allowed us to relax and to relax at the end of each day. It’s amazing how just taking care of one meal could relieve so much stress.

“My elementary school teachers and staff cooked dinner for me and my family for over a month,” marvels Reneata Benjamin, a pancreatic cancer survivor. “The school counselor coordinated everything and made sure everything was going well. And it really was such a blessing. My mind was willing, but my body just wasn’t able to cook. Thanks to my colleagues, I didn’t have to worry about what my family was going to eat while I was undergoing cancer treatment.

“One of my nieces made me a Christmas card during her freshman year of college,” says Herman Connor, a kidney cancer survivor. “She thanked me for supporting her and always encouraging her to do her best. It really meant a lot because she took the time to do it personally. For Valentine’s Day, another niece m gave away a fridge magnet with a cutout of her handprint and stickers on it. She was only 4 at the time, and it was a school project, but I thought it was kinda cool. she wants me to have it.

“When one of my oldest friends found out I had cancer, she made me some inspirational cards,” says Steven Champagne, a multiple myeloma survivor. “She hand wrote uplifting scriptures on it in beautiful calligraphy and then mailed it to me. I relied heavily on my faith to get me into treatment, and these cards served as a powerful reminder.

“The greatest gift I received was a custom-made blanket with my family’s names on it,” says throat cancer survivor Mark Teague. “It kept me warm while I was having chemo, because sometimes the infusion rooms were very cold. And seeing all those names written down made me feel like my family was there with me, even when they were up to 12 hours away.I still use this blanket today.

“The comfort was great,” admits Cynthia Sanchez, a thymoma survivor. “So a gentle rub on my back or the soft touch of a blanket was what got me this. One of my administrators gave me a plush sherpa throw with red poinsettias on it. brought great comfort during my chemo sessions. I still have it today – and I sometimes argue with my boys about who can use it!”

“As a cancer patient, you can never have too many cute, comfy clothes,” adds Carrington Marzett, a childhood leukemia survivor. “I loved getting new hats and bandanas after losing my hair. I remember getting a bandana with bumblebees on it which I loved. At 15, it wasn’t necessarily a gift I wanted, but it was definitely something I used a lot.

“I was given an envelope with some cash in it and specifically told NOT to spend it on bills,” says breast cancer survivor Gretchen Lee Herrera. “It was rodeo season here in Houston, so I treated myself to my first real pair of cowboy boots. I can’t tell you how much joy it gave me to wear them this year. there — and every year since! I even got to wear them to MD Anderson Boot Walk to End Cancer in 2021. What a feeling it was – to fundraise and give back while wearing these boots!

“I received a video from my absolute favorite band telling me they love me and wishing me luck with my upcoming brain surgery,” said Sabrina Dominguez, a medulloblastoma survivor. “It was even more special because the band was breaking up and they recorded it on the last night of their farewell tour. I was completely in disbelief. The fact that my cousin was able to find them and make them acknowledge my existence was more than I could have ever dreamed of.